This is becoming increasingly obvious, but it’s fascinating to watch the fast adoption of the mobile web. This inflection point  is another game-changer largely brought to us by Apple.  If the iPod official changed the way we consume music, it was the iPhone that really broke down the barriers between American consumers and the mobile web.  Side bar: it’s interesting to think about, especially when you consider that Fred Wilson and others (myself included) believe that Android will take the market leader position eventually.  Shouldn’t a more open platform have done that to the iTunes/iPod package?  Why didn’t it?  Is the RIAA the problem?

Anyway, a few fun charts.  According to eMarketer,  next year over half of college students in the U.S. will access the web via mobile devices several times per week or every day.  This is over 16% y/y growth:

So what does this all mean? More social and weather apps (I love this chart)…. 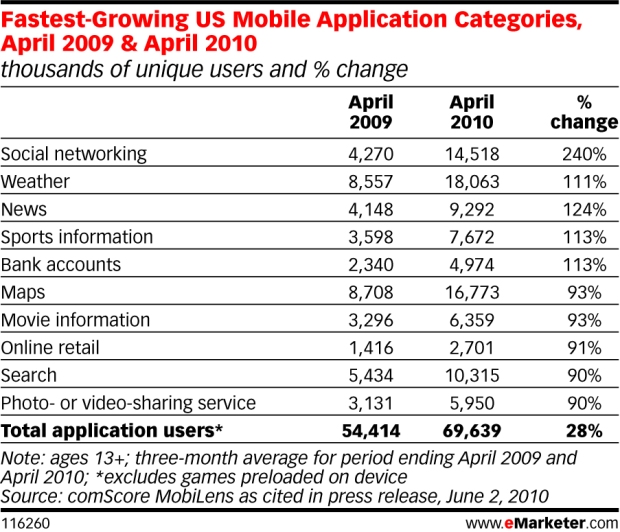 …and a lot more.  As we increase the frequency and types of behaviors that we engage in mobile,  we will continue to adopt utility applications and entertainment applications.  Christopher Cox was on 60 minutes discussion how 200 million of Facebook’s current users access their accounts through mobile devices. I’m not sure how his numbers reconcile with eMarketers (unless the rest of the world really makes up the other 186 million),  but it is clear to me that our experiences are increasingly becoming mobile.  For reals.